Crafts - Work in progress & fun with the kids

While I haven't written much here I haven't been idle, quite the opposite :-) I've finished a shawl as a birthday present which will remain hidden until the recipient has the thing in their hands, which you will probably understand. All I can say is I'm really proud of it as it features some fickle yarn which doesn't allow for mistakes or even frogging and I hope it really meets the presentee's taste! Pics and details as soon as the cat is out of the bag.

One of the other projects I've been working on is a cozy, snuggly and lightweight jacket for myself. I bought the yarn out of instinct (ahem) at a sale and found the perfect pattern for it via the Usual Channels (aka Ravelry search for projects made with this yarn). The story behind it is a nice one I think... I went to look for the pattern which was only released in a German speaking magazine. I checked online resources and the publisher's website to get my hands on it but to no avail. The issue out of print and completely sold out - not a happy camper! By chance I went to the store I bought the yarn at as it's around the corner and at the off-chance I asked the shop owner if she maybe had some of the back issues of the magazines around? She indeed had the one and sold it to me for less than half of what the magazine initially cost. Me? I was doing a happy-dance all day! So I heartily recommend the store for expertise, great assortment of goods and very friendly staff - Neidhart's Nähkistl in the south of Vienna (23rd district). Should you ever visit it please say the black-clad woman with the twins sent you ;-)

So, about the jacket itself - it's a very basic and simple pattern called "Trapezförmige Jacke" (trapezoid-shaped jacket) from the magazine Rebecca #46. It's my second project which I use the KnitPro needles for (wooden tips, though). So far I'm pretty happy and am looking forward to finishing and wearing the garment. 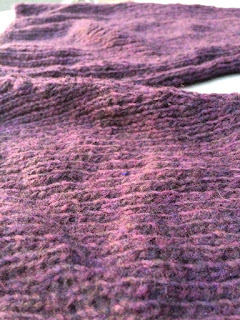 What else have I been up to... last Sunday it was Father's Day here in Austria. I had the idea to make a custom tee for both my husband and my father, with a saying which sadly only works in the German language I think ("Papa, wir stehen auf Dich" which literally translated means "we stand on you" but actually means "we really dig you". The kids had a blast making the shirts - "dirty" feet and doing artsy stuff :-) 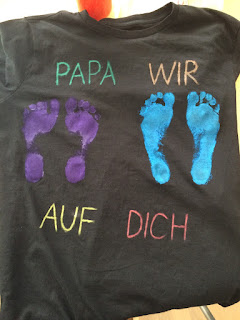 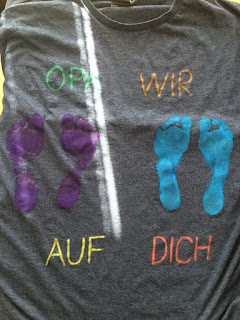 I was surprised the colors turned out better on the black fabric (the second shirt is a dark blue one) but was happy how easy the textile colors were to use. Needless to say both fathers were super-happy with the gifts and proudly wore the shirts right after they got them!
Posted by nilasae at 21:43