Crafts - A few "firsts" & the next finished project...

Ever since I held the first hank of hand dyed yarn in my hands I was eager to start a proper project and make something out of it. Equipped with the right kind of tools and finding a project that appealed to me on the Usual Site(tm) - here comes the purple Dragonfly Wing!

I used the String Theory Caper Sock Yarn, the color is named Elderberry, a beautiful dark purple shade. The yarn itself is very soft to the touch and almost works itself. It normally asks for US 2 (2,75mm) needles but I went with what was suggested in the pattern - US 7-10 (4,5mm - 6mm). While the result turned out a little bit smaller than I would have liked it's perfect as a shawlette and I'm looking forward to wearing it - if my daughter doesn't snatch it away first :-) Blocking went easier than thought and I ended up with a size of 160x40cm (about 63”x16”). There are still some 50g left of the 110g of yarn and I wonder what I'll make out of this...

A big "thumbs-up" to the creator of the pattern, Boo Knits. The instructions are very well and clearly written and there's a chart for the lace part, which is great for a visual person like myself. I'm looking forward to trying more of their patterns!

So, about the "firsts":
Last but not least, the beauty itself... 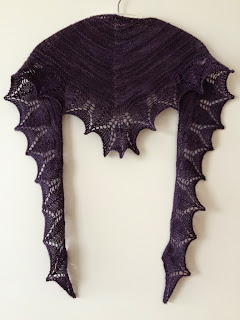 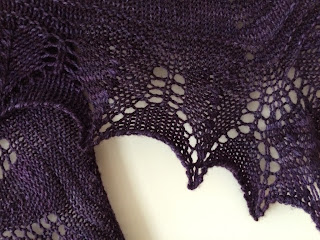